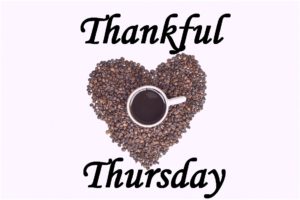 I started doing a Thankful Thursday post a few weeks ago on Facebook  but this week it is a bit more vulnerable and I thought I might actually begin doing my TTs as a Blog Post so that I could go back and reflect on them easier than scrolling through FB.

Usually I have soo many things to be thankful for that I usually have a difficult time deciding on what to share.  This week though, I know what I want to share, but the difficult part is actually putting myself out in front of everyone and admitting some things about myself.  It is typically not in my usual behavior to share much personal information with others…well, at least anything that will leave me feeling vulnerable or out of control.  I have always been a control freak.  My sweet husband who actually knows more about me than anyone has had a gosh awful time getting me to tell him anything for 17 years.  It has only been these last few that I have been able to let him see parts of me that I have kept hidden from everyone.

Sooooo, what I am thankful for this week is something that has probably not been seen, nor heard, and maybe not even noticed or recognized by anyone other than myself because while it is a tiny thing to most people, it is a GiHugic thing for me.  This great big ole huge thing?  Believe it or not, it is actually being able to post, comment and like things on FB, Instagram, here or in my newsletter and not having anxiety over it wondering if something I say is misunderstood.

Yea, plum crazy right?!??? But seriously y’all, for years I have been almost terrified to comment on things for fear of what someone would think, or maybe that I would be wrong! Or I would be misunderstood and have to defend what I said, or I worried that my opinion was not worth listening to or that someone else said what I wanted to say and they said it better than I could.

Or I would put the word or in my sentences waaaay too many times, 🙄 which I just did, and am leaving the damn things in anyway this time just because I am  a recovering perfectionist and need to get over it and remember the 3 powerful words “practice…not perfection” and just #PressPublish.  You can read the that blog here if you have not read it yet.

Countless times I have written comments on posts that were about topics I really wanted to dive into, only to delete it at the last minute.  I have wanted to reply when a question was asked and would answer it….only to delete it as well.  I would lurk and read blogs or news articles or whatever but be scared to discuss them either online or in person due to these fears.  A lot of times it was the fear of just being misunderstood and then having to defend myself.  I always wanted to please everyone and keep things on an even keel.  I dislike confrontation and would rather bury my head in the sand than get into an argument.

When I began my fitness journey, I also embarked on a journey about shifting my mindset about many things without even realizing it. Actually, when you get right down to it, everything is a mindset journey.  Nutrition practices, exercising, our attitudes and thoughts about ourselves and others are all mindset practices.  We learn certain things and then have to change our perspective if we want to make lasting and sustainable changes in our lives.

Ok, back to my Thankful Thursday post.  I am thankful for this small mindset shift that has slowly occurred over the last few years that now allows me to post this kind of stuff without deleting it, to be able to like and/or comment on other peoples posts and to include myself in discussions that I never would before.  Not necessarily without fear, but knowing that what I have to say is important…if only to me, and confident that I am now able to #OwnMyShit and take full responsibility for all my actions and words.  Cuz seriously, you have no idea the way my stomach is churning right now knowing that I am going to press the publish button on this post and let you all know that I have been insecure about anything.  After all, I am not supposed to be Wonder Woman (although shhhh, don’t tell anyone….but secretly…I am WonderWoman!  see, I got proof, in the photo below and in the bitmoji on my phone🤣….I know, I know cheezy and goofy as as all get out, but that’s me.  At least it wasn’t one of my terrible puns or strange movie references…this time) 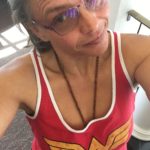 Anywho, for many years I let myself be manipulated by other people and was stuck in a victim mode instead of an abundance mode.  It was/is not an easy transition, but damn is it worth every single solitary moment it took to get here.  I am sorry to say that I was not being mindful enough at the moment it happened to recognize it then, but I do remember the instance in which this little shift happened.  It was when I sent a message to someone I had been following for a long time about a post they had made.  I had been on their email list and following them for years, have liked their stuff and even purchased some of their products but never had the confidence to speak my mind about anything they said even though I knew that we share a lot of the same interests and values.  I definitely resonated with her message, but was too scared to reach out…..until that one time!  I sent a short silly lil comment about a post and honestly did not expect to get an answer back.  But I did.  And the answer I got back was not anything like I would have expected and for a few moments I sat there and thought oh gosh, how do I take this?  Did she mean it like this? or that?  Did she mis-understand what I said?  I worried over this for about maybe a minute.  Then for the first time EVER, instead of trying to write back and explain to make sure she understood what I meant, I just laughed to myself and said get over yourself and was able to!  How freeing it was.  After that, I slowly began to start to comment on other blogs and send messages and write comments to other people, and now even write stuff like this and share it with you, without the fear of not being accepted.  All because I had finally accepted myself for who I am, without apology.

So what did I do to reach this place where I can accept myself without apology?  Several things.  The first step I took was reading the book  The Four Agreements by Don Miguel Ruiz.  This book was a lifechanger.  It made such an impression on me that I now keep a digital version on my phone and tablets and keep at least 1 if not 2 hardcopies at all times to gift to others who may need it and are interested in reading it.  I ask them to pay it forward to others as well.  After that there began a long list of other self help and personal development books that I have read, and I will do a post on them some other time because this post is getting long as it is.

AT the same time I began reading The Four Agreements I decided to try meditation for the first time.  I mean seriously something had to give with all the crap going on in my mid all the time.  I started with a 10 day trial of an app on my iphone called Headspace  It took all of 10 minutes each morning and was a guided instructions on meditation.  It was wonderful!  Then after my 10 day free trial was up I downloaded another app called Insight Timer and have been using it ever since.  It has thousands of guided meditations as well as just a timer for doing your own.

One more thing I did was hire a coach and join a group mentorship. I did this after reading her book Untame Yourself  which is only 2.99 on Kindle.  This lady rocked my world and helped me heal in so many ways it was absolutely unbelievable.  I cannot say enough good things about this woman.  The inner work I did with her guidance and teaching gave me the confidence to hire a business coach so that I could learn to move towards an online based business for the future.  At the end of my mentorship, she was changing things around a bit and I am not sure what type of mentorship options she offers at the moment, but I do know she has some fabulous products and services and I cannot reccommend her enough. She also has a closed FB group that you may want to join and a great podcast.

I hope this post has been of some value to you.  If you liked this annd would like to get more exclusive content about mindset, fitness and nutrition that goes ONLY to my tribe, please be sure to sign up for my newsletter.  As always if you have any questions, please feel free to comment or email me@suannarae.com